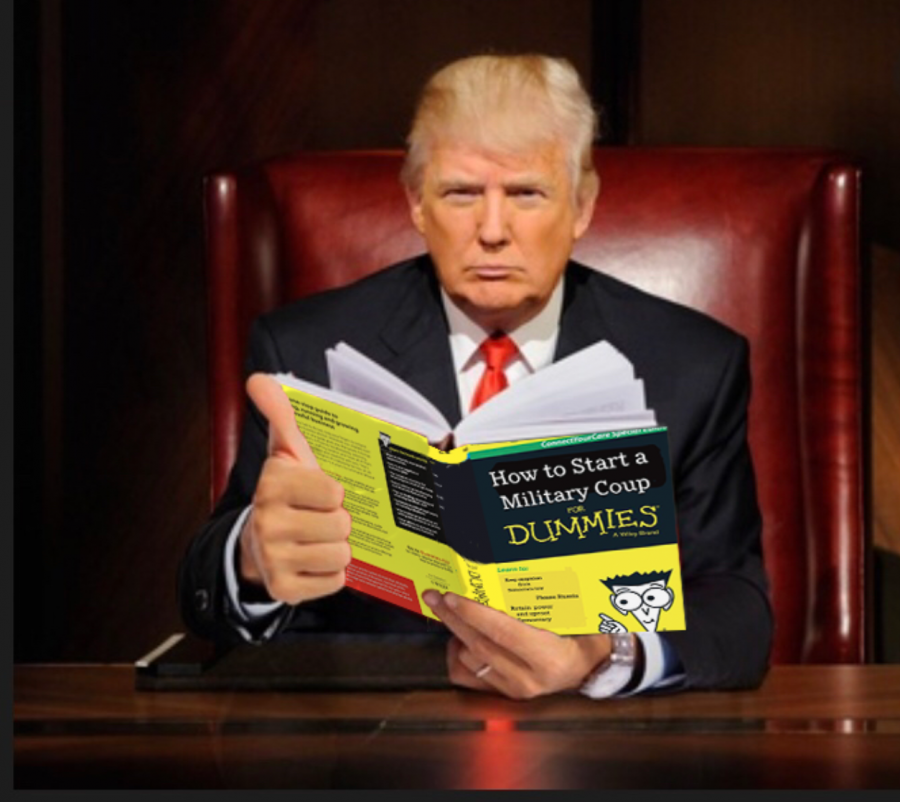 Last night, journalists captured the above picture of President Trump in the Oval Office, hunched over the book How to Start a Military Coup for Dummies. His staffers say that at 6 pm last night, when the most recent election predictions came in, Donald Trump received an unmarked package with the book inside and has remained locked in his office for the past 16 hours.

The polling from last night predicts Joe Biden has a 52% chance of winning. With the odds in his opponent’s favor, the President has turned to drastic measures. This new photographic evidence offers a concerning new perspective on the President’s statement to the Proud Boys at his first and only debate with Joe Biden: “stand back and stand by.”

The Radish’s investigative team got in contact with one of the president’s interns, who discovered a note on the box that the President had cast aside in the recycling bin, reading “From Russia, with love, xoxo.” The intern revealed, “I would have normally been on Tweet Duty, monitoring the President’s Twitter privileges to make sure that he doesn’t say anything worthy of impeachment, but last night his Twitter feed was oddly silent. I think this is the calm before the storm.” Instead, the intern spent their time delivering a record 11 orders of Macdonald’s to the oval office, through the secure air-lock chamber in the side of the wall which the President installed solely for keeping his McMuffins safe.

Mark Esper, Trump’s Secretary of Defense, released the following statement this morning in the Rose Garden: “I’ve never seen anything like this behavior before. For the past four years, I haven’t even been able to get the President to read his military briefings, and believe me, they have gotten very brief.” While delivering this statement, Esper appeared unconcerned and almost proud of the President’s sudden interest in domestic military strategy. “I’m so proud that my boy is developing into the kind of president I always intended him to be,” he said through tears of joy.

White House Press Secretary, Kayleigh McEnany, offered a different explanation for the President’s sudden interest in fine literature.  “During his time as President, Donald Trump has loved nothing more than delving into written work of the most scholarly and intellectual caliber. I’d even say that most of what he reads is not worthy of his mind’s intellectual advancement. He has done excellently on all his recent tests. Remember, person, woman, man, camera, TV.” She gave no other information about the suspected coup.

Here at The Radish, with further photographic evidence, we suspect that Donald Trump is following the lead of the recently appointed Justice Amy Coney Barret. Pictures from her time at Notre Dame show her studying the book Federal Case Law for Dummies. When walking out of her confirmation hearing, Senator Lindsay Graham noticed a similar book, Senate Confirmation Hearings for Dummies, peeking out of her bag. “It’s good to know that the President takes great care in appointing educated judges,” he later told reporters.

To get more information about the potential coup, reporters turned to the First Lady, who remained in the residential suit all of last night. She offered little insight with her statement, “I love my husband, and he is doing important work.” More telling, however, our same presidential intern contact overheard a phone conversation between the First Lady and one of Biden’s campaign managers. They seemed to be making plans to meet, and all the intern heard was the First Lady say “I’ll expose Donald’s plans then; I’ve been forced to hold his hand one too many times.”

While waiting for election results in the coming days, Americans aren’t sure what to expect. If Trump wins, we at The Radish suggest you look over the article, Start Your Escape Plan Today! Otherwise, if Biden wins and Trump moves forward with his military coup plans, you have two options: join forces with AOC in the resistance, or grab your MAGA hat and blend in with the militia. Good luck.