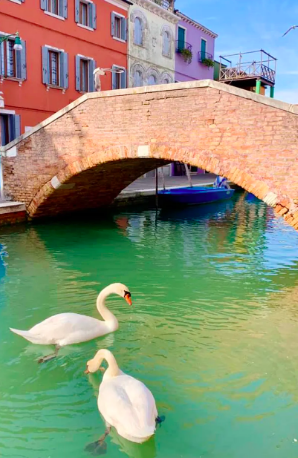 The canals in Venice are running clear

At this very moment, 158 million Americans are being told to stay in their houses, not interact with anyone outside their immediate families, and halt regular daily activities. Practically all nations in every continent around the globe are doing the same exact thing in a frantic attempt to prevent the continual spread of Coronavirus.

It may seem like the only effect of this ongoing shutdown is endless boredom; however, many researchers are beginning to notice the impact this global phenomenon has had on the environment. No one is traveling by plane; human flight has either been strictly prohibited or strongly discouraged. Production in some factories has slowed to a near halt, as individuals are not permitted work in them. The streets of the busiest cities in the world are almost empty.

For centuries, the human race has consistently been pushing upon the environment and the capabilities of our natural resources. We have already started to notice and bring attention to global warming, the crumbling ozone layer, the continual rise in greenhouse gases, and the threatening air pollution. Our environment is struggling, and the situation has only gotten worse and worse as the years pass.

Just as we were beginning to battle the climate situation, a new crisis arose: COVID-19. As more and more individuals are being told to self-isolate, keep to themselves, and stay away from the outside world, scientists have begun to observe noticeable environmental changes, as a direct result of our hiding. In China, gas emissions levels and air pollution have never been lower. Researchers at Columbia University found that, after a 35% decrease in traffic, Italy saw a 5-10% drop in CO2 emissions. There have also been effects of human hiding that are very visible; the Venice canals are bright and clear for the first time in years, and animals seem to be a lot less shy, wandering streets and drawing closer to civilization.

As America continues to battle through the Coronavirus pandemic, it wouldn’t come as a surprise if we were to see these same effects on our own environment. People simply just aren’t engaging in so many of the harmful activities that they were previously; constantly driving everywhere, crowding streets, and interrupting the natural flow of ecosystems.

“Nature is sending us a message,” says Inger Andersen, the UN’s environmental chief. Corona has shown us that the environment needs help, and that we would all benefit from paying more attention to our endangered climate. Francois Gemenne, director of the Hugo Observatory, has even found that, due to the improved environmental levels arising as a result of Corona, more lives might be saved than taken by the virus.The World Health Organization estimates that seven million people worldwide die within a year due to pollution, while the estimated Coronavirus death toll is slightly over one million. Social-isolation as a consequence of this disease has already begun to reduce pollution, which will undoubtedly positively affect a great deal of individuals.

It is no secret that this pandemic is a terrible event, taking lives and ruining so much of what makes our society function. All of us have way more time on our hands than one could ever want, so it might help pass the time to think of all the ways in which we could push our planet toward improvement. Hopefully, when the world has recovered, the lessons learned about our environment are never forgotten. When it comes to the climate crisis, we are the problem. Maybe a wake-up call is just what we needed, so that we can all keep working to value life and do the best in our power to preserve it.