Political Correctness: The Worried Youths’ Guide on What Not to Say 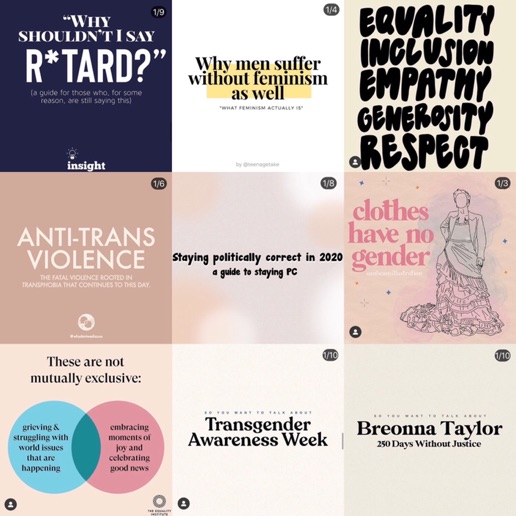 “Is wearing a lei offensive?” a friend anxiously asks me as we converse about what to bring to Hawaiian spirit day. Her question was not strange to me, I had posed similar questions to myself occasionally. Alas, I have always brushed it off; no one else seems to be bothered by wearing leis, why should I? Despite my reassurance, I came across an article outlining exactly why leis, among similar Hawaiian party favors, are a clear form of cultural appropriation. Given the recent surge of Instagram activism posts, I’ve been seeing these types of articles more and more. As a matter of fact, many traditions and word choices people once accepted without question are now off limits. Nowadays, navigating socially acceptable behavior requires a guide.

The topic of political correctness has spread like a raging virus, or perhaps a better term would be wildfire, over the past five years, gaining more attention after the June outburst of Black Lives Matter protests. Gen Z has seen spikes of activism before after the Stoneman Douglas High School shooting in 2018, causing a nationwide school walkout. Within the past few months, widespread movements as well as the pressure of being socially, culturally and politically aware have heightened significantly. The concern my friend expressed likely would not have even passed through our minds a year earlier. Nonetheless, in 2020, the anxiety to not offend anyone increases with each news cycle.

A growing fear is falling into the deep depths of “cancel culture,” — social media’s way of exposing the offensive actions or words spoken by an internet personality. On a magnified scale, “cancel culture” is as simple as fearing what others will think if one says or does something that may offend someone. It is challenging to walk the tightrope of political correctness. This past Halloween, for instance, a post circulated regarding culturally insensitive costumes. Meanwhile, less than three years ago I recall peers dressing up as Egyptian pharaohs for a school project— this same costume in 2020 would spark claims of cultural appropriation. What about something even more common, a lei?

Activist and native Hawaiian Anne Keala Kelly was interviewed by Deep Green Resistance News Service recently on the topic, “‬Reducing us to a lei-making people is a hatred for the spiritual and philosophical bones of us.‭” Despite Kelly’s perspective, everyone, even the most culturally sensitive, has likely worn a lei as a party favor or costume. Nonetheless, both stereotypical Halloween costumes and leis were once considered socially acceptable, and are drifting into the realm of untouchable subjects: the realm of “cancel culture” accusations.

A guide to staying PC looks different for everyone; however, judging whether or not the following tradition is offensive serves as a starting point. Examine an old time favorite: “Cotton Eye Joe.” Unfortunately, the techno pop hit engraved in everyone’s childhood was also engraved in the memories of plantation life for slaves and owners in the mid 1800s.

Slaves first sang “Cotton Eye Joe” in the years predating the Civil War, around 1860. Yet, one of the first published versions of the tune was recorded in American writer Dorothy Scarborough’s 1925 book, On The Trail of Negro Folk Songs: “…this is an authentic slavery-time song. The air and some of the words were given by my sister, Mrs. George Scarborough, as learned from the Negroes on a plantation in Texas, and other parts by an old man in Louisiana, who sang it to the same tune. He said he had known it from his earliest childhood and had heard the slaves sing it on the plantations.” (68) Given the context of this party favorite, is “Cotton Eye Joe” culturally appropriate?

Evidently, the tune was PC at the time of its creation, but so was owning other human beings. Therefore, should this initially light-hearted tradition be held to current standards of what is acceptable?

From culturally insensitive Halloween costumes and traditions to the cautious use of pronouns, what was once universally accepted is rapidly changing. Thus, the condensed guide to appearing “woke” has become “do and say whatever one wants, as long as it fits the current acceptable standards.” One can actively show his, her or their political correctness by putting pronouns in bios and Zoom names, wherever possible. Repost colorful activism slideshows with bubbly font that go with the current news cycle. Avoid talking about any past actions or words one has said that could be considered offensive now. Most importantly: use free speech, but not if it is to promote beliefs other than those of the conformed youth. Apply all of the given suggestions, and no one can be offended or harmed. Unfortunately, these rules are not full proof; no matter how an idea is formulated or carefully presented, there will always be someone who is offended. When it comes to free speech, the bane of political correctness, Gen Z is limitless and limited simultaneously. At the end of the day, a wobble or slip is inevitable when walking the tightrope of political correctness; yet, the challenge does not defeat the purpose of trying.