The January 6th Capitol Riot: Inside and Out 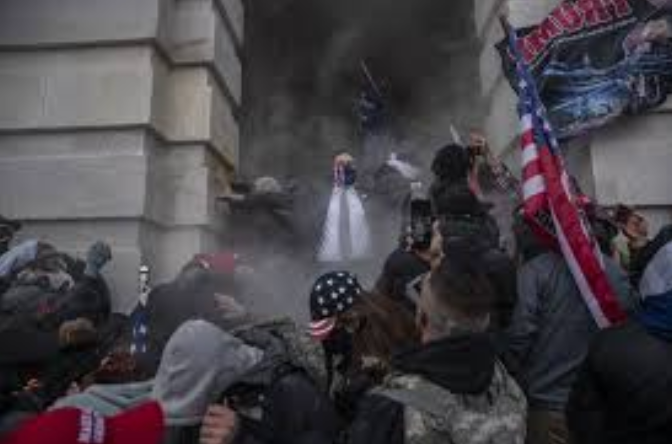 Wednesday, January 6th, 2021 was a dark day for American democracy. The world watched in shock as the attack on the U.S. Capitol unfolded. While Congress convened to count the electoral votes for the 2020 presidential election victory of Joe Biden, a mob of Donald Trump’s strongest supporters stormed and vandalized the Capitol building. The insurrection marked the first time that the U.S. Capitol was last breached since 1814 -when British troops torched the city’s federal buildings- over 200 years ago. Considering that the Capitol is supposed to be one of the most protected locations in the country, this leaves many wondering what exactly happened and how did America end up in this state of mayhem? Here is a timeline of the insurrection from the 2020 election to the second impeachment trial of Donald Trump.

After days of waiting in anticipation for the 2020 presidential election winner to be called, on November 7th at 11:24 a.m., CNN was the first news station to project Joe Biden as 46th president elect. Other stations including NMC, CBS, and Fox News followed with their calls soon after. As the final votes were counted, which mainly consisted of mail-in ballots favoring Biden, it became apparent that the projections were correct, and Trump lost the election.

However, before the swing states were even called, Trump observed the large influx of mail-in ballots after election day and realized that they could ruin his lead in key states and thus cause him to lose the election. He refused to accept the loss and made false claims of large-scale election fraud in states that he eventually narrowly lost the vote in. These states included Arizona, Georgia, Michigan, Nevada, Pennsylvania, and Wisconsin. After bringing some 60 lawsuits, and even offering financial incentive for information about fraud, Mr. Trump and his allies failed to definitively prove any case of illegal voting. There was not a single case of an undocumented immigrant casting a ballot, a citizen double voting, nor any credible evidence that legions of dead votersgave Mr. Biden an unlawful victory. Despite his obvious loss, Trump continued to rally his supporters through social media platforms into believing that he won “BIG, but [democrats were] trying to STEAL the Election”. On December 19th, 2020, Trump announced that he would be holding a “Big Protest in D.C. on January 6th” called the “Save America Rally” to object to the election results.Trump stated that it would “be wild”. Although citizens did not expect a riot to occur, it was clear that some of Trump’s most loyal supporters were ready to do anything possible to overthrow democracy; including Kylie Kremer who stated in a tweet that “The cavalry is coming.”

Trump supporters arrived at the Save America Rally ready to march in resistance to the election results. Little did they realize they were about to create history.

After weeks of rallying up his supporters and urging them to attend the march, the day had come to protest the electoral votes. When the morning arrived, thousands assembled on the Capitol lawn. Among them were the Proud Boys, a far-right group, identifiable with their bright orange hats.

As Trump’s speech began, more rally attendees gathered around the Capitol, and a noticeable tension grew between them and the police. Capitol grounds were protected by temporary perimeter fences, and there were a few officers equipped to defend potential threats. As Trump’s speech went on, his supporters became increasingly exasperated and some started to get violent. In his speech, he had many provoking statements including “if you don’t fight like hell, you’re not going to have a country anymore” he said. As his speech neared an end, supporters left the rally and headed toward the Capitol.

On the east side of the capitol, where there was a much smaller police presence, protesters swiftly pushed past the barricades. Additional state and federal law enforcement were not pre-staged at the time, leaving people frustrated that the capitol police were so unprepared. Within minutes, protesters began to swarm other entrances to the Capitol. At 1:00, congress convened in a joint session to formally count the votes of the Electoral College. Outside, people chanted: “Whose house? Our house!”

On the West side, there was heavier security, so it took longer for the crowd to breach the barricades, but eventually they made it past. The other sides of the Capitol were eventually breached, and the Capitol was surrounded by the mob. Legislators continued to debate despite the danger approaching. At the northeast corner, police removed a barricade after violent confrontations occurred between officers and the crowd.

Rioters on the west side of the Capitol broke into the building through a door and broken window around 2:11 p.m. The Senate went into recess at 2:13 p.m. and at 2:14 p.m., heroic Officer Eugene Goodman is videotapped tactically leading a Pro-Trump mob away from Senate Chamber. The Senate later voted by unanimous consent to award Congress’s highest honor to Goodman with the Congressional Gold Medal.

Promptly, the mob flooded the building, and the House recessed. Members of the House were told to lock down and shelter in place. Around 2:45, members of the capitol’s security team barricaded the entry doors to the chamber. Congress members retrieved gas masks from underneath their seats, and tear gas was released. Outside the house chamber, protesters attempted to get into a secure hallway. There, a Capitol policeman shot Ashli Babbitt, a protester,. She died later that day. By 3:00, hundreds of rioters occupied the Capitol. They roamed halls, vandalized the building, and even sat at Speaker Pelosi’s desk.

As the insurrection continued, support from more than 18 local state and federal law enforcement agencies began to arrive. The officers tried to dispel the violence with tear gas and flashbangs to move protestors out of the building. On social media, many political leaders and allies of Trump including Joe Biden and Marco Rubio called on him to make a statement and denounce the protests. At 4:17 p.m., Trump tweeted a minute-long video speaking directly to the protesters. He said that they, “have to go home now [and they] have to have peace.” He additionally stated that he loved them, and they’re “very special”. Later in the day, a 6 p.m. curfew was put into place, and the crowd dwindled down.

By 8:00 p.m., senators resumed session to confirm the electoral results. After hours of work and some attempts to seek fraud in key states, congress certified Joseph Biden and Kamala Harris as the 46th president and 49th vice president of the United States at 3:39 a.m.

On January 12th, nearly a week after the insurrection, The Radnor School Board met for a government relations and communications committee meeting. At the meeting, committee chair Andrew Babson introduced a possible message from the board that would explicitly state the school’s public disdain towards the riots. The statement pointed out the violent and “white supremacist and anti-democratic ideologies animated” by the protesters. Ideas from the statement include  that the “Board of School Directors of Radnor Township School District [should] condemn the violent actions of the individuals who invaded the U.S. Capitol Building” along with “call[ing] for civil and respectful discourse and engagement as a people, behavior which Radnor Township School District strives to instill in all students.” Despite Babson’s view that “this is a resolution that democracy is good, and racism is bad”, many board members had differing opinions. While other board members condemned the insurrection, they thought “this kind of resolution [was] not the proper vehicle for that”. Other members including Committee member Mrs. Dunn exhibited similar opinions.

As a result of the Capitol riot, the House began debating impeachment of Donald Trump. Quickly, they voted to impeach him on a single article of “incitement to insurrection” after a brisk two-hour debate. The vote was 232-197, with ten Republicans and no Democrats crossing party lines.

On January 22nd, new Senate Majority Leader Chuck Schumer announced on the Senate floor that Speaker of the House Pelosi would send over the article of impeachment from the House to the Senate on January 25th. February 9th, the first day of trial, began with constitutional arguments. Trump’s attorneys argued that the impeachment was not constitutional since his term in office expired. The four-hour debate concluded with a 56-44 vote allowing the trial to proceed. Beginning at noon on February 10th, each side was given a total of 16 hours of argument divided over two days (requiring a total of four days if fully utilized). The House impeachment managers held the floor for the first two days with only several hours of their time unused. Trump’s counsel used less than four hours of their time on February 12th. After further questioning and debate amongst the senators, the Senate voted 57-43 to acquit former President Donald Trump on February 13th, 2021. Seven republicans joined the 50 democrats to find Trump guilty, but they fell short of the two-thirds majority needed to convict.