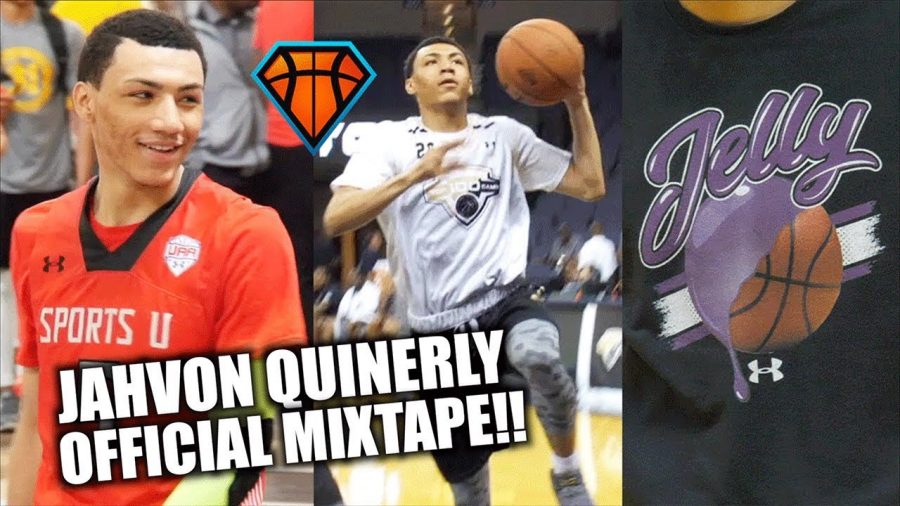 A screenshot of Jahvon Quinerly's mixtape. Quinerly was an inventor of the impressive move known as the 'jelly."

With basketball becoming increasingly linked to social media every year, many users are now seeing lesser-known players, of even high school or middle school age, in their daily sports feed. Often, players who stand out competitively from their division of play garner a large social media following, and posts of them absolutely killing their opponents regularly accumulate a large viewership. And although many players have been hyped up before entering the NBA, there is an increasing number of players who have amassed a following when they were only in middle school, due to a mixtape of them going viral.

The short videos of these players have ushered in a new era of basketball entertainment. Schools such as Mater Dei, Montverde Academy and Oak Hill all have basketball programs on par with many Division 1 colleges. Although not every high school game is being broadcasted nationally, outlets such as Overtime and Ball is Life both frequently post cut versions of highly ranked high school matchups and attain high viewership.

The aforementioned basketball programs, and many more, consistently produce top-ranked players and future lottery picks, but perhaps more importantly, they are repeatedly seen on Overtime’s or Ball is Life’s pages. This results in players gaining more and more attention on social media.

With thousands of people checking Instagram and Twitter every day, a popular way of branching out to harbor an even larger fanbase and show off a player’s skills, is to post a mixtape of oneself pulling off impressive maneuvers and plays. These videos are often reposted by networks and garner not only a more impressive following for the player but also an interest in the high school they play at. And although circumstances have made a jam-packed gymnasium a thing of the past, both the high schools and players are still finding more and more attention through the social media activity they implement.

But despite the likes and followers a player may have on their Instagram or Twitter, amassing a social media following does not automatically give one a scholarship at a blue blood school. Take for example, Julian Newman or Jordan McCabe: both young players who had amassed a large social media following at very early stages of their basketball career, but never found much success outside of the high school level. And despite their large fanbase, after their followers began seeing them play against higher-level competition, these players began to fall from their stardom.

But as there are the aforementioned high school archetypes, there are also players such as Collin Sexton, Tyler Hero and, as Bleacher Report and ESPN like to remind us, LaMelo Ball and Zion Williamson. All players who annihilated their competition in high school and are living up to the expectation which their social media presence set as a precedent. Much of the attention these NBA rookies receive, before even entering college, surpasses any level of fame many NBA veterans have cumulatively gotten in their entire career. All thanks to the tool of social media.

Take, as a hypothetical, two high school students who have been dominating their local competition. No matter how good the two players might be, if one takes two individual clips of the players scoring, out of context, the two players might seem like the second coming of Scottie Pippen and Michael Jordan. If they are better or worse than the infamous duo, an out-of-context clip is just that – a clip where the viewer merely sees the players scoring. Despite already being made, biases and a gauge of a player’s skill level, should not be measured via their aura of talent which social media projects. Although the players may be talented, the high school playing level is so broad with leagues that are as good as some collegiate divisions and others where the school’s basketball program barely gets enough funding to have jerseys.

Despite the professionalism many high school leagues are displaying, a high school player is rarely what the predictions make them out to be nor are they what the mixtapes show them to be. Regardless of a player’s social media page which may portray them scoring with ease, there are quite a few players who can, with a less than a-minute-long summation of one’s game and an exciting song in the background, does not fully show every aspect of their abilities. And although these mixtapes adequately serve their purpose as a showcase for that player, it is only showing a small portion which often inadequately acts as a microcosm for one’s skillset.

Seldom a player gets famous from his viral mixtape and is, in reality, a subpar player. As many who have made names for themselves, with their flashy moves and hundreds of millions of views on their mixtapes, are often seen to be among the upper echelon of high school players. But take the founders of the infamous jelly fam movement as an example.

Jahvon Quinerly and Isaiah Washington invented the impressive move known as the jelly. The move shows one’s athleticism by jumping up for a layup and moving the ball up, down or to the side all while in the air. Despite the difficulty of this move and the raw athleticism and strength required to pull off this feat, pregame layup lines saw thousands of players trying to recreate this motion.

As many failed to complete this move in pregame warmups, Isaiah Washington and   Quinerly were both repeatedly scoring thirty on some of the best high school competition, all the while showing off their savvy layup maneuvers to the hundreds of cameras that followed them every game.

As the two of them garnered millions of views, they eventually had to move their basketball careers out of the cramped high school gyms to college gymnasiums. And the second they stepped onto their respective college campuses they disappeared. Seemingly in a puff of smoke. Although Jahvon Quinnerly has recently been playing well with Alabama, Isaiah Washington and the other smaller members of the phenomenon were rarely heard of once their final season of high school ended. Despite the occasional highlight reel the players would appear on, Jahvon Quinnerly is the only member to see any ounce of success at the college level. As for the jelly fam phenomenon, itself, the movement has grown much larger than the players, and thousands of players are still trying to replicate their move.

So the question begs to be asked: how does the social media influence and popularity of hoop mixtape culture change basketball?

Well, no one can draw any generalized conclusions, as this phenomenon is still relatively new, but their influence on many school basketball programs is very clear. As there will always be high school leagues that stand out competitively, programs that take players across the country are being found more and more. And as the mixtape culture becomes increasingly popular, as it is, these high school programs will have more fans to provide more collegiate level development for these mixtape legends.