Misinformation Behind the Raider Debate 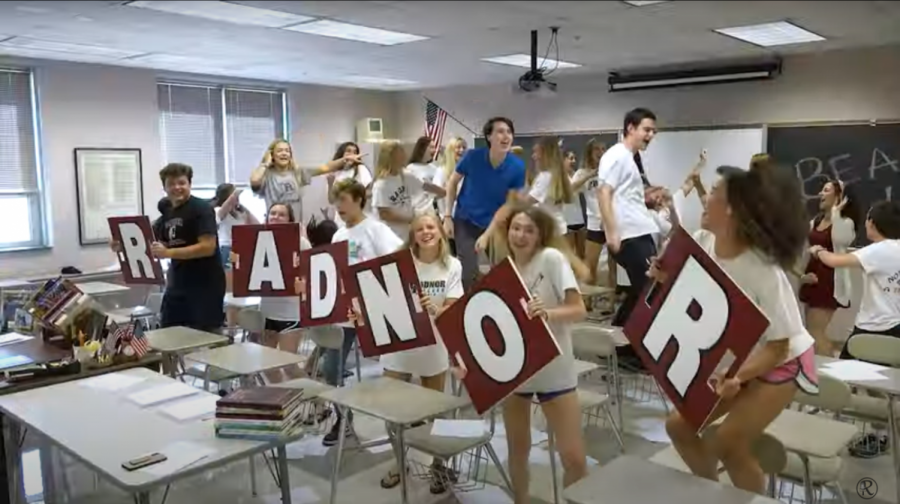 Radnor students celebrating in a scene from the 2019 LM video.

I was casually scrolling through Instagram when I noticed the video for the first time. Amidst every other story, there was my sister’s face circulating throughout the day’s array of posts. The picture was from LM week, when she was a senior participating gladly in the video and dancing for the pep rally. It was a common image of 2020’s class holding up large letters to spell Radnor, jumping around and having fun in a schoolroom. My sister lifted the “N.” Somewhere around the third time the image came across my screen, I realized what it was promoting. What did a happy picture of seniors celebrating their last LM week have to do with the people lobbying to keep the Raider mascot?

She invited me to her room to watch the video and figure out what all this commotion on social media was about, and I quickly grabbed my little sister. The three of us watched, huddled curiously around the computer. I estimate the video featured my alumni sister around four times, and not just within last year’s pep rally footage. The “Keep the Raider” Youtube page included a completely random picture of my sister and her two friends during swim season, standing in front of the pool. Those pushing against the retirement of the Raider mascot decided to repurpose random images of random students for their own controversial cause, without any layer of consent.

The video was propaganda. Propaganda serves as misinformation meant to persuade individuals who don’t have the correct knowledge or understanding to make their own decisions on the topic. For example, the video advertised the data from a survey in which community members were expected to contribute their ideas for a new mascot name: “And speaking of being silenced, in a recent survey where 1,300 people chose a new nickname, 992 people chose ‘Raiders’ as their name.” Yes, close to 75% of submissions did read “Raider.” However, this survey was not a vote and did not function to choose between keeping the old mascot or moving on to another. Any person could contribute any number of ideas, meaning one person could account for 50 or more of the 992 Raider entries. Although many valid Raider supporters contributed their opinion on the nickname, the above survey isn’t cited as a vote and cannot support the claim that the “majority” of Radnor shares the Raider sentiments.

As someone who actively listened to the discussions, meetings, and reasonings last summer over retiring the mascot, the sheer number of people following the crowd and defending the Raider without properly understanding the issue is astounding. Videos like “Keep the Raider” appeal to school spirit and blind students to the actual issue at hand. Echochamber Facebook groups isolate populations, incite anger, and rile readers toward their cause. Students, alumni, and community members have all voiced compelling arguments as to why the school should move forward without carrying the baggage of the Raider. The problem resides in a lack of information reception; the video feeds students a half-story of the issue. Meanwhile, last Tuesday’s school board meeting allowed for public comment from both sides.

Considering the turmoil in September, the news that community members were continuing to lobby for the Raider name didn’t strike me as surprising, even though the Radnor School Board had decided to retire both the offensive Native American imagery and the name “Raider,” to avoid negative connotations. Recently, however, as the community attempts to move forward in choosing a new mascot name, the supporters of the Raider have rallied, gathering a platform and organizing a walkout.

For reference, the last time Radnor allowed students to participate in a walk-out unpenalized was in 2017, to protest gun violence and rising rates of school shootings. If anyone wondered why the administration permitted exactly 17 minutes for the most recent walkout, it’s because this was the time-frame students chose to honor the 17 lives lost in the Parkland shooting over four years ago. Everyone deserves the right to protest, but comparison of these two drastically separate instances has angered those believing an issue as insignificant as a high school mascot shouldn’t inspire a school-wide walk-out.

The leaders heading the movement to maintain the Raider nickname stress that they wish to eliminate any association with the offensive Native American mascot, encouraging all those in attendance of the walk-out to avoid brandishing Raider imagery. Although this promise places us on the right path, the question left to consider is if anything is actually accomplished from this process if we only relinquish the mascot. In 2013, Radnor High School expelled the physical Raider mascot from parading costumed as a Native American at games, a decision not affiliated with the School Board, but kept the nickname and much of the imagery. Unfortunately, we all know how this turned out. The association never ended, real change didn’t happen, and the progress became lost. The “Keep the Raider” movement supporting the removal of the mascot sounds positive and ideal right now, but history repeats itself. Will the imagery leave with the declaration, or will it cling to the name “Raider” for the years to come?

The school board represents the final decision in the mascot matter; however, students have a crucial opportunity to decide Radnor’s future through a final, school-wide nickname vote. Many of those in support of the Raider lobby for its placement on the ballot. Although the push for this change seems a little late, there is a chance it could be included. Voting for something as trivial as a high school mascot still relates to voting for elected officials. To make a decision that benefits the community and proves at all worthwhile, the voter must possess the knowledge needed, from all parties involved, for a well-informed choice. I implore students to educate themselves before the vote and understand their decisions. This involves attending school board meetings, opening yourself up to the evidence provided by movements on both sides, participating in the focus groups, and empathizing with the perspectives of others, especially the Native American community. Democracy balances on the steady stream of truthful information; voting isn’t enough to classify a free and fair society if the people don’t understand the situation clearly.

The Raider may represent a symbol of school pride or unity to you, but the decision-making process for the nickname centers itself around inclusion and acceptance. As we move forward into a new age of diversity in Radnor, staying informed on how the mascot impacts others is crucial to the progression for our school. Videos spewing propaganda, what your friend claimed in Math Class the other day, and Facebook groups preaching a single side’s perspective don’t represent the real news, the facts regarding the situation. We solve disagreements by looking past ourselves to the world beyond, not by isolating our understanding within a bubble of ignorance. The Raider debate lies at the heart of disinformation, and it’s time we looked beyond that veil into reality.

Article updated on 5/6/2021 to clarify that RTSD discontinued the use of only the costumed Raider in 2013 (not all Native American imagery as originally reported). See the RTSD Communications Department’s statement from 2013 for more details.