Egg Babies are Back and Better than Ever 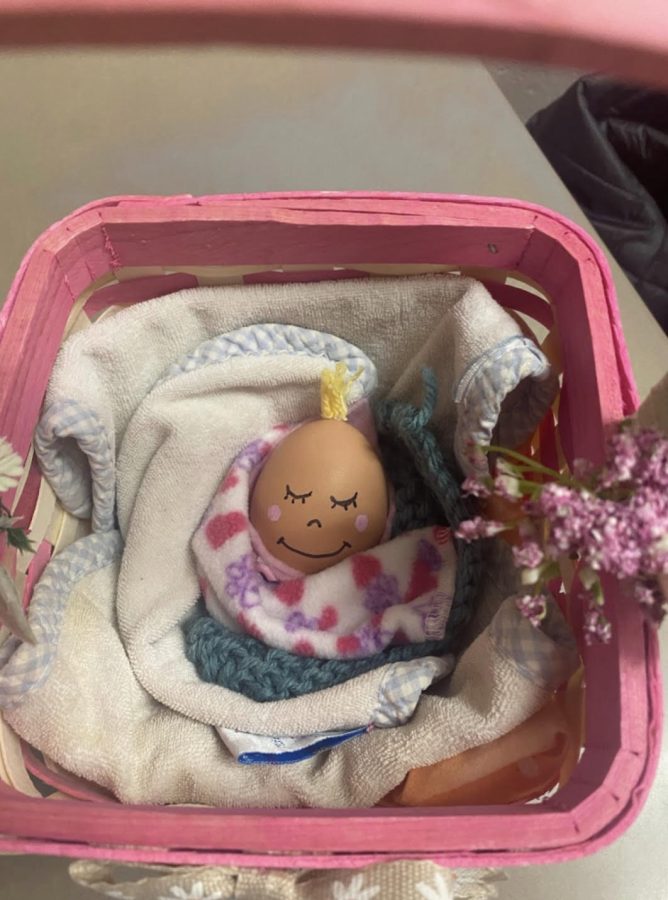 In the past two weeks, Radnor High School received some brand new students: eggs. Not just ordinary eggs, extravagant egg babies in luxurious baskets. Recently, AP Psychology took on a new project of caring for an “egg baby,” or even “egg twins,” which requires students to care for their beloved egg wherever they go; class, lunch, even the school musical. Now here’s the catch: if you drop the egg, you fail.

According to AP Psychology teacher Mr. Capone, this project correlates with the “human development unit” in the course, particularly “child-rearing,” or the taking care of a child.  Students even had to create a birth certificate and social security number for their egg baby. With this, students also created an egg baby scrapbook, accompanied by pictures of their baby throughout the two weeks. Outside of the egg tasks, students are also required to “interview their parents and reflect on themselves as children,” says Capone. The project, which has now been going on for about “15 years,” started before Mr. Capone even began teaching. He explained that he believed the project would be beneficial to continue, as it provides students with an in-depth understanding of child-rearing. While many students found the project interesting, some past participants found the grading practices in the project harsh. However, Capone addressed these concerns explaining this Psychology is an “AP level course, so rigorous work should be expected.”

Naturally, parenting comes with major responsibility. When asked about the hardest part of parenting, many responded that it was making sure the egg is always cared for. Sophomore Lauren Meyer describes that “even the smallest tasks, like going to the bathroom, require a babysitter,” which is hard to find at times. Sophomore Zoe Margolies also felt the same, feeling that even “remembering to get the egg,” or in parenting terms “giv[ing] the baby a lot of attention” can be strenuous. With these tough challenges, students get a sense of how actual parents may feel every day.

Another challenge students faced was making sure the egg basket was secure. “I make sure that my basket is deep so that the eggs won’t roll outside of it, and since my basket is rectangular I can hold it like a football to keep them closer to my body,” says sophomore Kaitlin Browne. Students must make sure their egg(s) do not move around or easily fall out to ensure they do not crack. Along with the baskets, the eggs must also be protected in the hallways from so-called “egg-swatters” and “egg-nappers,” who attempt to endanger egg projects through attacking the babies. Echoing the fear that accompanies such behavior, sophomore William Meyer describes that he and his co-parent used “three layers of padding and swaddled the egg” for maximum protection.

As the project came to a close last week, students felt relieved, but saddened, to throw their beloved children in the garbage. Until next year, egg babies!