“The Radish offers satire and parody as commentary and critique on matters of public interest. No article posted on the Radish should be taken literally or viewed as representing truthful statements of the individuals or organizations which may be mentioned in the articles.” 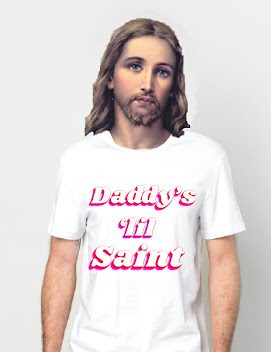 Nepotism babies, we love them and we hate them. Some young people get mad that there are celebrities their age all because they have a parent or friend in the entertainment industry; they’re just set up for success from birth. Others wake up every morning wishing that their parent hadn’t taken up a reliable job like lawyer or engineer, and instead became an actor, director, producer, or at least one of the behind-the-scenes guys. Many of the beloved young actors and actresses today are the product of nepotism: Zoe Kravitz, Lily-Rose Depp, Maude Apotaw, Jaden and Willow Smith, Bella Hadid, Kendall Jenner, and too many others.

But out of all these nepo babies, who has gotten the most attention to date? The biggest nepotism baby is, hands down, Jesus H. Christ.

We all know Jesus and his widely-known accomplishments, but really no one would have even given him a second look if it wasn’t for his godly dad and saint of a mom. Right when he was born, three rich kings road to baby Jesus to give him presents; he had barely taken his first breath, he couldn’t walk, and he couldn’t even talk but he got all this special attention because word got out that his dad was God. He quickly gained fans only because his mom was the miraculous Virgin Mary and his dad basically created all life on Earth or whatever. He didn’t even do anything impressive to earn his praise; he just sat helplessly in his cradle and had all of these presents brought to him. 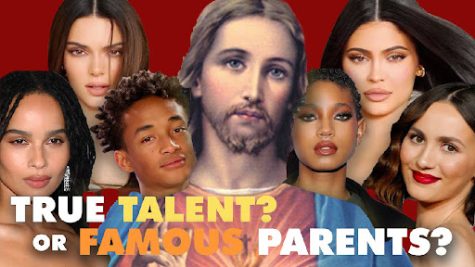 All nepotism babies have the spotlight shone on them at a young age as they follow in the footsteps of their parents. Well, Jesus was literally and physically born into the spotlight; I mean, come on, the day he was born a star appeared in the sky, practically an old-age spotlight, to guide his fans to him.

In addition to craving the spotlight, nepo babies tend to go about life being overly confident. According to an ancient paparazzi by the name of John, Jesus said, and I quote, “When I am in the world, I am the Light of the World.” Now if that isn’t the statement of a narcissist, I don’t know what it is.

Every year people throw big parties with their families to celebrate Jesus’s birthday because they think he’s so cool, but they’ve never even met him. That’s basically equivalent to me throwing a birthday party for Justin Bieber with two of my friends from elementary school because I idolized a man who I would never actually speak to. Though, I have to say it was fun running the Belieber club.  There’s no way they actually love him, they’re just obsessed with his aesthetic.

Jesus literally had his own fan club that followed him around and practically worshiped the ground he walked on. They even gave their fandom a group name: the disciples. That’s not even creative. Then, his fan club wrote his biography, though they tried to make Jesus look modest by not incorporating his name in the title. Jesus took advantage of the fandom and took publicity tours all across the Middle East.

When nepo babies are accused of taking the easy way or just caring about fame, they become eager to be relatable and “normal.” Jesus followed this stereotype by seeking out a badass crew of criminals and outsiders. This could also be a way of lashing out against his father, who was never home and cared more about work and all of his other children than him.

Infamous for being tone-deaf, some nepo babies love to show off their extreme privileges of the world.  Jesus turning water into wine and walking on water, just because someone said “do it, you won’t,” is a prime example.

Expensive trips around the world are what create that worldly, unique “it factor” that all nepo baby icons are so heavily praised for. Because it’s wealth—not coolness or talent—that makes nepo babies coveted. This is exactly what Jesus did when he participated in mission trips across modern-day Israel, Palestine, Egypt,  and Lebanon. We all know he was just flexing his nepotism powers. I can just picture him posing next to starving children and women for hours while someone painted a portrait of him being a saint or whatever so that he could show off his goodness of heart to all his friends.

So now whenever you look back on your past Easter and Christmas celebrations, remember that your actions have helped another vain and entitled kid’s status rise, all because of his A-list dad.