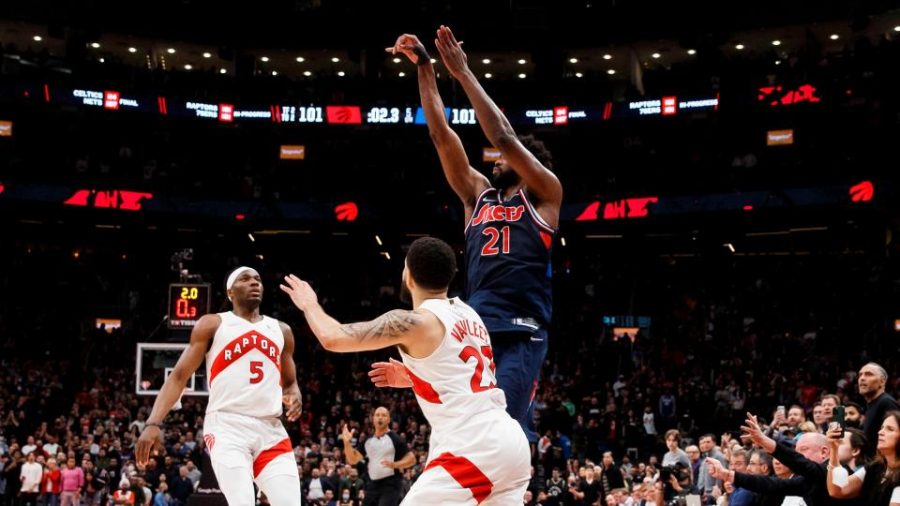 Starting the series off strong, the 76ers took a 3-0 lead to begin their bout against the Toronto Raptors. Beginning with two blowout matches, Tyrese Maxey led the Sixers with a career-high of 38 points in game one, further-solidifying his role as a scorer in game two.

In game three, the Raptors upped the intensity with terrific shooting by the first time all-star Fred VanVleet, even forcing overtime. But with pesky defense from Tobias Harris and an incredulous game-winner from Joel Embiid, the Sixers silenced the Toronto home crowd and Raptors head coach, Nick Nurse.

After the 76ers’ tremendous high of game three, the Toronto Raptors maintained their grit. With a constantly changing defense of zones, man-on-man and box and ones, mixed with a bad shooting performance from Embiid, Maxey and James Harden, Toronto crushed any thought of a sweep. And while Raptor’s forward Pascal Siakam had an impressive showing, there was still little doubt of a prolonged series.

However, the Raptors stunned Sixers fans at home, even after losing VanVleet. The Sixers were unable to crawl over Toronto’s lengthy defense. With a terrific performance from OG Anunoby and Siakam, Toronto safely secured their second win over Philadelphia.

After this loss, the once easy victory seemed far out of reach, and even Sixers fans began turning on the team; specifically, head coach Doc Rivers and James Harden received plenty of backlash. With Rivers’ history of blowing 3-1 leads, seen recently in the Clippers’ loss to the Nuggets in the Western Conference Semifinals during the Bubble, many fans such as Radnor’s Nick Monty believed “that the Sixers were about to blow the worst lead in NBA history.” No team has ever lost a series when up 3-0, but the 76ers looked on pace to do so.

While not all the blame can be placed on Rivers, the offense in games four and five were objectively over-reliant on drive-and-dish plays that Danny Green and Tobias Harris could not consistently make.

Moreover, after the late acquisition of James Harden for the problem-child, Ben Simmons, many Sixers fans have been disappointed in Harden’s play as a 76er. Some, like Jackson Hicke, even go so far as to argue that “we should have kept Simmons.” And while Harden has been less consistent from deep as of late, his contributions to the Sixers’ offense are irrefutable, and he has definitely been a large factor in the recent upsurge in Maxey’s play.

While many Sixers fans feared the home-court advantage Toronto would have heading into game six, any help from the crowd the Raptors may have had fell apart in the second half. Philadelphia began running up the score, while Toronto had several minute-long stretches without any points. Ending the series with a blowout win put Sixers fans back on a similar optimism to game three, but the abrupt news of Joel’s fractured orbital and mild concussion made the upcoming Sixers-Heat series even more of a challenge.