Every year fans, including myself, anticipate the most glamorous event of the year: The Met Gala. In May fans watch celebrities, invited by Anna Wintour, ascend the steps of the Metropolitan Museum of Art in New York City wearing custom-made designer clothes that leave the fans awestruck. The Gala finally returned to normal when it was hosted in May and not in September.

This year’s theme was gilded glamor. The gilded age in the US pays homage to the period of prosperity, industrialization, and growth in the US from 1870 to 1890. The era itself had disparity between the citizens in the southern parts of America and the ones in northern and western parts of America. The latter had rapid industrialization hence leading to economic prosperity whilst the south was destitute. Gilded itself means to flaunt wealth and glamor to conceal the social unrest and turmoil of the era. Hence, the gilded era refers to the fashion of the time.

This year’s theme was very interesting, however, it was misinterpreted by many designers hence celebrities not being “on the theme.” If examining the guests’ attire individually, most of them were distinctive, eccentric, and elegant. However, holistically they were not following the theme: gilded glamor.

Here are the top celebrities who distinguished themselves from the crowd:

In the past, Kim Kardashian has had some surprising looks such as the infamous “all black” look at the 2021 Met and the “wet” look at Met 2019. This year she surprised the audience by strutting down the red carpet in a vintage Jean Lewis custom made for Marilyn Monroe. This dress was infamously seen when Monroe sang “Happy Birthday,” to JFK. Kim admits to Vogue that she had to “adhere to a strict diet” to fit in the dress since it couldn’t be altered. In addition to this, she dyed her hair blonde and had a replica of the dress so that she could change into it once she was done walking the red carpet. She says to vogue, “I’m extremely respectful to the dress and what it means to American history. I would never want to sit in it or eat in it or have any risk of any damage to it.” Thus she perfectly timed a dress change while being at the event. Kim did get hate for wearing the infamous dress; the audience thought it was an act of disrespect to Marilyn Monroe and that she did not do justice to it. However, there were supporters of the dress who believed the dress was amazing and that this surprise was indeed awestruck. The dress itself did flaunt its crystals and expressed materialism, however; it wasn’t precisely the angle this year’s theme was following. Overall, Kim’s dress does follow the theme, but to an extent, and isn’t hundred percent spot on.

Blake Lively is famously known for matching her dress with the color of the carpet at the met. This is evident at the previous Mets. This year she has done it again! Not only did she dress on the theme, but she also matched her dress with carpet whilst giving a dress transformation right there and then. Ryan Reynolds was indeed speechless. “Instead of looking to fashion to influence the dress, I looked to New York City architecture and classic buildings,” Lively explains in a video. 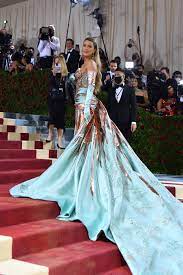 She gestures to the turquoise skirt train from the second look and adds, “This is the constellation from Grand Central Station,” then points to the fitted metallic gown underneath, “This is the Empire State Building, [and] the draping is the Statue of Liberty.” She adds, “The crown has seven tiers just like the Statue of Liberty has seven rays, which represents the Sun’s rays, and also the seven seas and continents—which also represents welcomeness, inclusivity, freedom…And it has just 25 windows, so Lorraine [Schwartz] put 25 stones at the bottom [of the crown].” In my opinion, Blake was one of the celebrities most on the theme which was a feat in itself considering many celebrities didn’t follow the theme.

Kendall Jenner has stunned the audience again by boldly dyeing her eyebrows. She let go of her brown eyebrows and bleached for the gala. Jenner showed up to the gala in a custom-made black tulle Prada top with a net embroidered overlay. She paired it with a voluminous black silk-satin skirt with hand-pleated ruched details. Kendall Jenner has been making the audience speechless since Met 2018 when she wore a glitter-flecked La Perla slip. And since then she has been living up to her reputation as being one of the best dressed at the event. Her silk skirt screamed luxury, glamor, and wealth and her fans agree. Her bleached eyebrows, however, did face some controversy. People deemed it too daring and did not follow her looks. I disagree with that because her look would not have been appropriate and daring for the Met if she hadn’t bleached her eyebrows and slain. Kendall Jenner was most definitely one of the celebrities who were on the theme and still made her daring persona affect her look for the night.

The Hadid sister, Bella and Gigi, are no strangers when it comes to wearing the most iconic outfits at the Met. However, this year while their outfits were iconic; they weren’t on theme. Gigi made a bold choice by straying away from the expected met attire and surprising the audience in custom-made edgy, deep red patent latex pants attached to pointed-toe boots and a matching corset. She topped off the one-piece with a massive floor-length bubble puffer coat featuring enormous sleeves, a ruby necklace, and wine-colored lipstick. She also wore her bright blonde hair slicked back into a sophisticated bun, screaming class. According to Versace, her coat was  “a modern interpretation of coats from the late 1800s … The corset and the exaggerated volume of the jacket confront each other in a decadent display of contrast inspired by the volume and dramatic change in womenswear silhouettes of the late 1800s.”

Bella on the other hand wore a similar look to Gigi but in black. The model wore a custom-made Burberry which had a plunging leather bodysuit embellished with side chains, plus tulle sleeve gloves, sexy stockings, and a floor-length lace train. She even roped a vintage pearl multi-strand necklace from Briony Raymond around her ankle to nod to the vintage glamour of the theme. While I am not impressed with Gigi’s look, I am truly in awe of what Bella had in her mind. Her tight leather look makes her look attractive and shows a sense of promiscuity is what she had in mind. In that era, while the northern and western parts of America were flourishing the southern wasn’t. So to earn some women started prostitution by displaying and enhancing their beauty with tight leathers which make sit look cheap because at that time cheap leather was what women could afford. This also indicates the lack of class and elegance with the whole look Bella had in mind. The aspects of the attire that follow the theme include Gigi’s coat, which I agree is a modern representation of the era, and Bella’s anklet. However, Gigi’s coat reminds me of Cardi-B’s dress at Met 2018: Heavenly bodies. This itself had disappointed fans due to its lack of originality.

The famous Euphoria antagonist appeared in front of the camera in a stunning all-black suit with sequin embellishments embellished throughout. He was photographed wearing a crisp suit with a classy black tie and white shirt. His suit was one of the nearest accurate representations of gilded glamor. I say “near accurate” because the look would‘ve been better if it were a longer coat and not a modern suit which contradicts the era of class and societal niches. The tie adds a modern touch that does not represent the late 1800s. The tie doesn’t follow the theme because ties themselves weren’t part of the male attire during that era.

Many celebrities failed to dress according to the theme; however, a reporter, Genesis Suero, at the gala did not fail to dress according to the theme. The 30-year-old reporter for Telemundo amazed the crowd in a floor-length gold and white ball gown, embroidered with ornate beads on the bodice, sleeves, and skirt. Her fairytale-themed dress gained a lot of attention especially when the celebrities were berated for not following the theme. Thus, she shares the spotlight with some of the biggest stars on the internet.

Apart from Blake Lively, Taylor hills dress is an accurate representation of gilded glamour. From the royal blue trailing dress to the thigh-high boots, everything was perfect. The blue satin off-the-shoulder gown had long sleeves, huge flowers around the bodice, and an enormous train that descended the steps of the Met. The highlight, however, was colorful embroidered flowers that covered the length of the train. The dress itself was short at the front, visibly showing an outdated which was a perfect rendition of the theme. She paired this with over-the-knee stiletto boots in the same color as her dress. She paired the look with a curled up-do and dangling earrings but decided to keep her neck bare.

Lady Whistledown has made an appearance at the gala and she most certainly does not disappoint. Nicola Coughlan has set her reputation by truly showing how the Featheringtons do it. Her dress and her look indeed made her the diamond of the event. The bubblegum pink, puff-sleeved gown dotted with embellished flowers is the perfect encapsulation of the show and the era considering the times were near each other. While the black cape and sparse feathers add the kind of drama necessary for making a statement at fashion’s biggest event. Aimee Croysdill accessorizes with a pair of opera-length gloves and jewels by Swarovski; a cool climber earring keeps the look youthful.